Trading in scissors for a blade

Back at Dragon Con in August, The Scissors Man ran into Mark Hopper and Jessica Collins from the blacksmithing workshop Goat n Hammer. Five years ago, the workshop was born in Atlanta as a gineau pig program for individuals interested in learning the historic craft of blacksmithing. The workshop’s name, Goat n Hammer, is based on the legend of Thor, whose chariot is pulled by two goats and his weapon of choice is a hammer. Mark, who has over 27 years of blacksmithing experience from training in Europe, created the workshop as purely educational, and wanted to pass on the knowledge of the ancient trade to students. 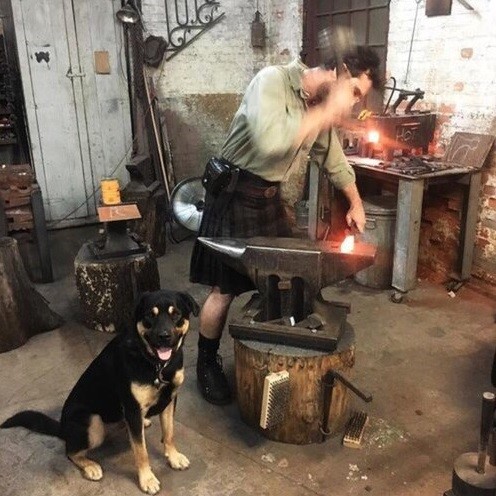 Goat n Hammer has created hundreds of classes over the years, focusing on different aspects of the trade, including blacksmithing, bladesmithing, knife grinding, lost wax casting, and more. They usually have 4-6 classes a week for students to learn and practice their skills, including featured lessons and a guided “study hall” called Hammer Therapy. Students normally stick around for years, practicing their craft and gaining new skills. The Goat n Hammer classes are very focused on the interests of the students. Mark explained, “We do a lot of feeling of our community and are always asking our students, what are you interested in next? What do you want to do?”

When asked what their advice to newcomers looking to learn the craft would be, Mark and Jessica explained that learning the art of blacksmithing is similar to learning the alphabet. Once a beginner learns the basic 15 processes, or letters of the alphabet, they are able to move on to learning basic constructs, or words and sentences. Once processes and constructs are learned, beginners are able to begin creating objects, or paragraphs. The two explain, “A lot of beginners try to make specific objects without thinking about the processes involved, and so they’re limited in their skills. If you learn the processes themselves and their own constructs without attaching them to one specific object, your skills will be a lot more diverse and you will be a lot more creative within it.”

Jessica described an experience she had while giving private lessons to one of her students. The two were clashing on a project making big coffee scoopers. Jessica clarified, “When we are first teaching processes we keep it pretty strict, but once we start getting into spoons and knives, we add onto those constructs. Students get very uncomfortable, because it’s outside their comfort zone and manner of thinking. [The student Jessica was working with] actually had this light bulb moment after a couple of hours, where she got it. Then she started looking at the objects we have hanging on the wall and began to understand how they were done. We get those light bulb moments all the time.”

Mark explained that when a student has that light bulb moment, “they’re starting to speak the language and can translate the time capsule of knowledge we are given through the objects left behind in history. They can then deconstruct the objects to figure out what the previous generations are trying to write.”

Goat n Hammer travels to blade shows a few times a year, mostly in local areas near Atlanta. Mark and Jessica prefer to meet their potential students in person to help convince them to learn the trade, because it allows them to be comfortable and break the fear students may have of trying something new. Next, Mark is teaching a blacksmithing boot camp course at John C. Campbell Folk School in Brasstown, North Carolina from January 6-12, 2019. You can also find Goat n Hammer at The World’s Largest Blade Show in Atlanta from June 7-9, 2019.

As a takeaway,Mark hopes he can instill inspiration in people to create. “The biggest thing we are trying to do is just inspire people to go out and make things. People have become so consumerous, that nobody has time to make something. Humans are meant to create, so just get out and make something. Try it, because it could change your life.”