Cosplaying her way to the top

Motivation, it’s great when you have it, but it’s also a bummer when it’s lost. And when it’s lost, it drags you down with it. We know all of us go through it – being in the creative space – but how do we get back up and keep chugging?

Casey Renee, a true artist we met at Dragoncon, has inspired us to keep moving no matter how tough the days 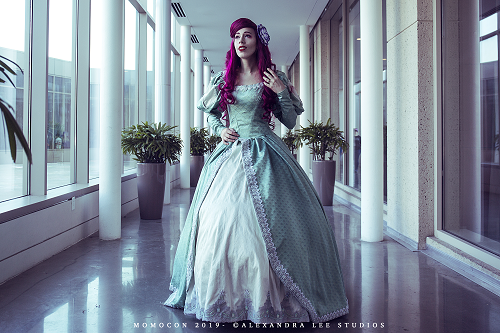 get.Living in Chicago about 6 years ago, Casey was exploring her acting career and working at Starbucks. That said, her acting career wasn’t going anywhere which was causing frustrations to increase. Casey decided to become the characters she’s always wanted to be by buying an $80 Brother sewing machine off Amazon to make a Batwoman Costume.

“People didn’t know who Kate Kane was, so I wanted to show people who she was on my own accord,” Casey said.

She spent hours scrounging through “really bad” tutorials on how to make certain aspects of costumes, researching cosplay until she had read it all. She fell in love with Cosplay and being able to find an artistic outlet she didn’t know she had – it filled the void of her acting.

“I fell in love with everything about Cosplay … at the time, it didn’t exist like it does today,” Casey said. “I was so in love that I decided to make costumes for my friends.”

Though she didn’t make money from her friends, she knew there was more potential to her work. She opened an Etsy store where she could commission her talent to the world.

Shortly after, she and her fiancé moved to Atlanta, where she’d continue the trend of her art and working at Starbucks. That said, Casey ended up breaking her foot and wasn’t able to work for 4 weeks. Unfortunately, Starbucks had to let her go.

“It was a blessing in disguise because I could focus on my Etsy shop,” Casey said. “I actually never went back to Starbucks and have been working off Etsy fulltime for 3.5 years.”

With the success of the online shop, Casey knew her talent was growing, but it wasn’t until Twitchcon Cosplay Contest in 2018 that her career launched.

“Twitchcon Cosplay Contest has been around for about 4 years. I had tried many times, not being accepted into the contest, not placing within the contest, and so on,” she said. “That didn’t stop me, though. I kept moving and kept trying to make the best costume possible. And I won. The entire thing.”

Casey mentions that Cosplay is much more than just sewing. You have every artistic craft as part of one. Whether it’s painting, wig-work, pattern-making, or cosmetics, it’s all a part of Cosplay.“You have to have all these little skills to piece together, so it’s a ton of work.” she said. “My costume took 12-hour days, and at least 6 months to create.”

With winning the contest she’s been dreaming of and having the successful Etsy shop, Casey also streams how-to videos and learns more about the industry from others.

“I started streaming a while back to put my name out there. Little did I know that I would meet some of my best friends on there and become a part of a community,” Casey said.

Community is an understatement, based on our conversations -- it should be family and here’s why.

Casey mentioned that she had a Singer Stylist that she burnt the motor out in – talk about working hard! With that, though, her community of friends decided to band together and buy her a new Singer Heavy Duty sewing machine, which she’s now created over 200 costumes on.

So what’s next in the pipeline for Casey Renee?

“There is too much talent out in the world that has yet to be seen on a stage like Twitchcons Cosplay Contest. My goal from here on out is to help those who need encouragement, who need tips and tricks of the craft, who might be lost and need a grounding point. I want to be all the things that others were for me on my journey to being a champion.”

Want to learn more? Here’s where you can find everything Casey Renee: